Japan is one of the snowiest places on the planet and roughly 4m to 15m of snow falls every winter across approximately 500 Japanese ski resorts. The fresh powder snow, affectionately referred to by Japan ski enthusiasts as “JAPOW”, attracts hundreds of thousands of visitors every year.  While Japan has world class snow, it also boasts amazing cultural attractions. Here are a list of our favorite experiences accessible from the best Japanese Ski Resorts.

One of the largest winter festivals in all the world, The Sapporo Snow Festival attracts approximately 2 million people every year from Japan and abroad. Odori park which runs through the heart of Sapporo for 12 city blocks, serves as the main attraction during the festival hosting massive snow sculptures (some 45 feet in height!), stages built of ice and snow, half pipes for boarders and skiers, food, booze and so much more. The incredible snow sculptures are lit daily until 10 P.M. and there is live music at various stages throughout the day. Other areas throughout downtown set up installations and attractions including ice sculptures, snow tubing hills, and of course street food.

90 minutes from Sapporo by JR train, this snow festival differs from Sapporo’s in size and scale, focusing instead on creating the most charming and intimate atmosphere possible. The main light display takes place on the Otaru Canal where lights and candles are suspended over the water and placed within ice and snow sculptures on both banks of the canal. The whole town embraces the festival and locals build their own light displays, sculptures, and snow mazes for visitors to enjoy. Wander around town with a cup of warm wine or sake and a camera and take in the breathtaking beauty of a town united in snowy celebration. If possible, plan your trip so you can visit both Sapporo and Otaru. The Sapparo Snow Festival and Otrau Snow Festival celebrate the beauty of the snow; the Nozawa Fire Festival participants take a different approach. Each year villagers cut down trees from the mountain and create a massive wooden structure. After a Shinto priest performs a ceremony blessing the structure, the fire-setting battle begins. Two groups of men square off; one group defends the shrine and the other wields torches and works to burn down the structure. The whole spectacle can take up to 4 hours, but festival goers receive warm sake and unforgettable experience.

The world famous Snow Monkeys are the only known monkeys to bathe in hot springs and they’re easily accessible from several different resorts! The snow monkey park sits within a large forest so visitors must walk approximately 30 minutes before seeing the monkeys. Take a day off the slopes to shoot pictures of adorable monkeys cleaning, sleeping, and relaxing in and around the hot springs.

Monkeys not your thing? How about a trip to one of Japan’s oldest standing castles? Nicknamed “Crows Castle’ for its unique black color, it’s one of the few castles in Japan constructed in an open plain. It’s about 90 minutes on JR train from Hakuba Station and easily accessible by car from several other great resorts.

Note: This was originally published on travelswithbibi.com 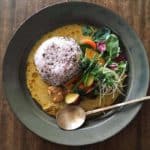